This training document shows the setup and editing of campaigns.

You can also find a course on campaigns at Mapp Academy. Log in and search for "Mapp Intelligence - Campaign Analyses".

Besides the campaigns, that are tracked via URL parameters (e.g. Newsletters, Display, SEA), other accesses can be tracked as campaigns, too (e.g. Direct Entries, SEO, Other Sources). Intelligence allows campaigns to be structured arbitrarily.

The smallest unit of a campaign is called "Ad media" by default. It is based on a unique data source. Commonly, this is an URL parameter, that is used as Ad media name at the same time. 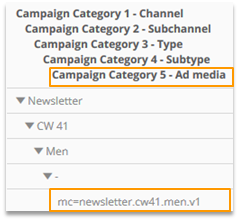 In this example "Ad media" was complemented by the expression "Campaign Category 5". This facilitates the retrievability in the filter engine and with the choice of dimensions.

Further information can be recorded for an Ad media by using:

Example: Categorization of an Ad media via campaign categories

The amount and names of the categories can be configured by you according to your requirements.

Categories can be divided into:

Ad media are typed via traffic sources. Therefore, a superordinate analysis is possible.

Traffic sources are especially useful in Customer Journey analyses. Besides the Ad media itself, they are the only option for analyzing the order of the used campaigns.

The configuration is done under Mapp Q3 > Configuration > Marketing Configuration. Predefined traffic sources can be found there. They have to be customized individually.

A weighting can be set up for each traffic source. This influences the matching in complex attribution models (several campaigns are assigned to a website goal). 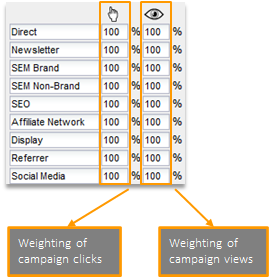 Customizations have no retrospective influence on Customer Journey analyses.

Changing information about an Ad media are tracked via campaign parameters.

Therefore, not every information has necessarily to be depicted in the Ad media (and thus in the campaign tree and the Customer Journey). 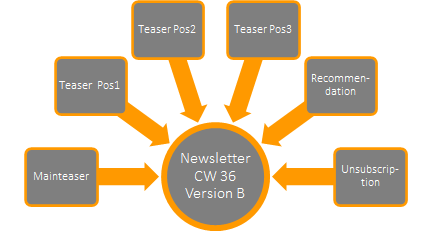 The parameters are handed over via a separate URL parameter or within the tag.
E.g. www.mapp.com?wt_mc=newsletter.edition5&wt_cc1=Text_Pos1 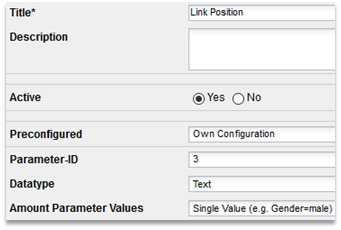 Depending on the data type chosen in the configuration, campaign parameters can be analyzed differently.

The example shows, how information to an Ad media can be depicted:

1.5 How can values be handed over?

There are several possibilities for handing over values for campaign categories, traffic sources and campaign parameters.

This section provides answers to the following questions:

In order to identify campaigns, various data sources can be used. The most common data source for doing this is the URL parameter.

Secondary data sources base on the identified referrers.

Example:
A newsletter is opened directly in an email software (e.g. Microsoft Outlook). The link contains an URL parameter and at the same time, there is no referrer.

This means, theoretically, two campaigns could be assigned:

However, only the newsletter campaign is taken into consideration, as this is based on a primary data source.

There are 2 ways of setting up Ad media:

We recommend setting up campaigns automatically. Once they are initially configured, new Ad media are added without further ado.

In doing so, the media code can be used to define the structure of the Ad media directly. Different hierarchical campaign categories are separated with a ".". 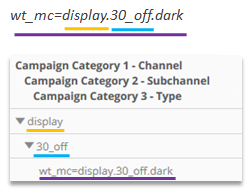 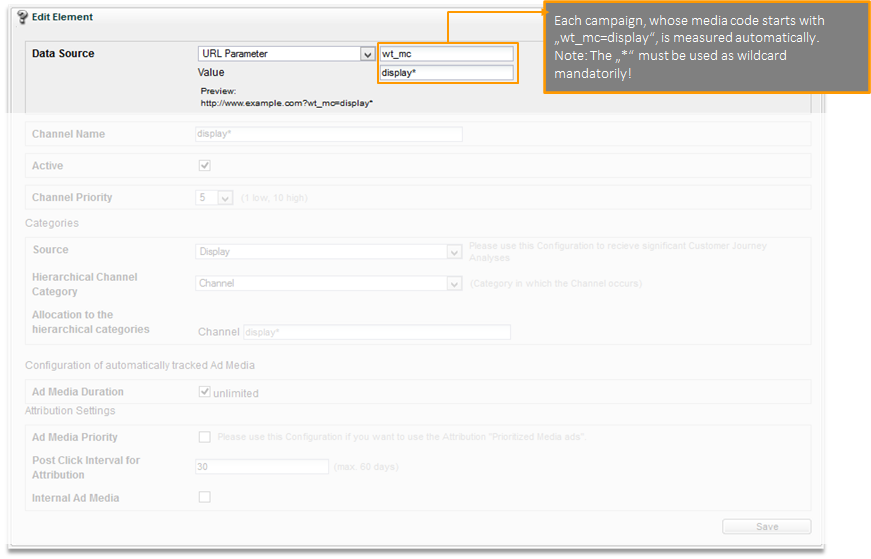 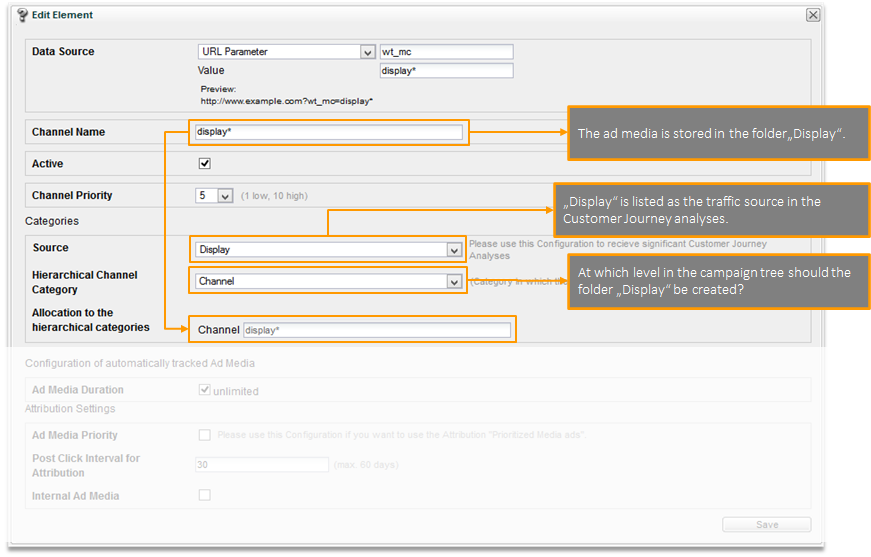 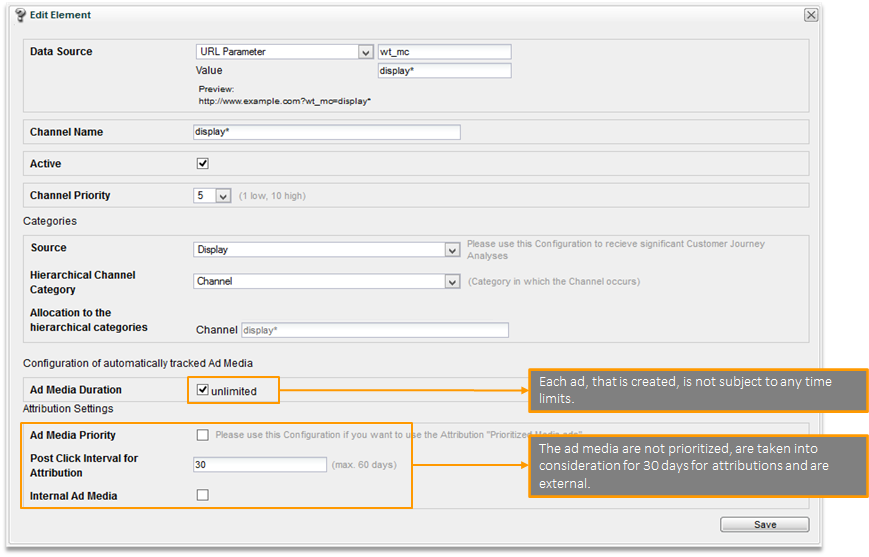 The channel is used to provide a rule, on the basis of which the Ad media are automatically recorded and configured.

Changes to the configuration of the channels, therefore, do not have any effect on existing Ad media!

What happens if in the media code more levels are passed than there exist in the campaign tree?

1. The Ad media is sorted into a category according to the definition of the automatic channel.
2. The single values are sorted from the end to the beginning; all levels that are too much are cut off. The Ad media name always contains the complete media code.

What happens if in the media code fewer levels are passed than there exist in the campaign tree?

1. The Ad media is sorted into a category according to the definition of the automatic channel.
2. The single values are sorted from the beginning to the end; all empty levels get a „-“ assigned. The Ad media name always contains the complete media code.

2.2.2 Manual setup in the user interface 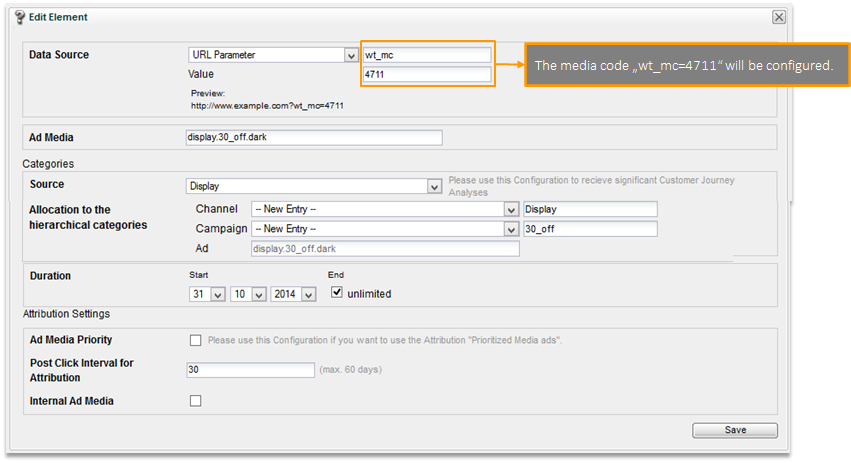 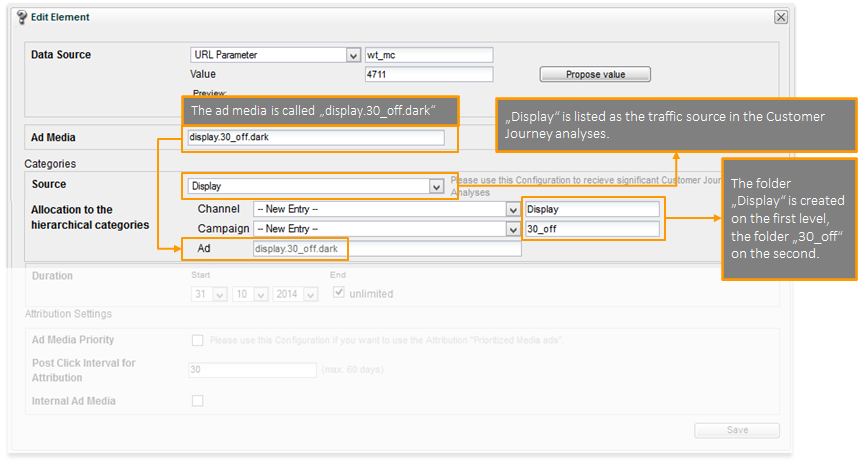 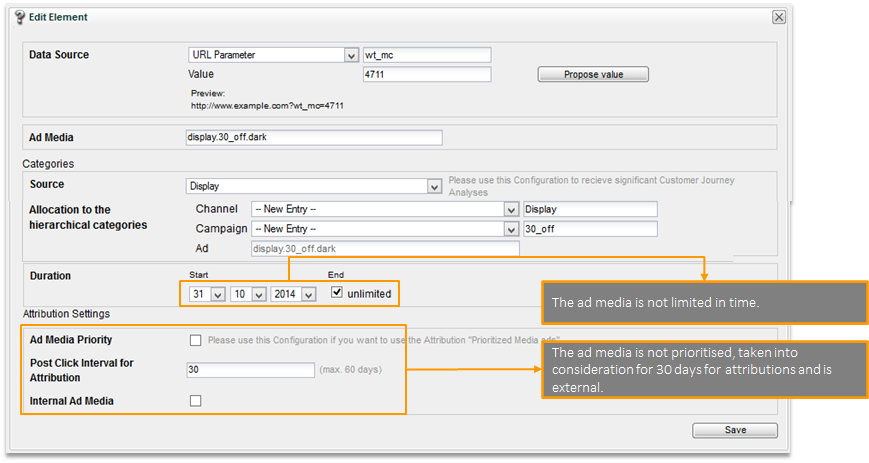 After saving you will see the Ad media, which has just been created, in the campaign structure.
(Mapp Q3 > Configuration > Marketing Configuration > Campaign Structure).

Ad media can be created, deleted, and edited after having been imported into an Excel file.

Export the campaigns.
To limit the number of campaigns, that are exported, you can limit and filter campaigns using the checkboxes.

All adjustments to Ad media can be done in the Excel file.

After editing the file it can be imported again.

Changes will not be visible in Mapp Intelligence until after the next data update (generally every hour).
The status can be viewed under "Show Current Imports". Any errors, that may have occurred, are also displayed here.

Mapp Intelligence provides an API for the automatic measurement and data import from Google Ads. 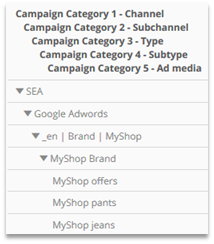 The campaign categories are matched with the respective layers of the Google Ads campaign via the interface configuration. We recommend setting up a campaign tree consisting of at least 5 levels in order to fully match the Ads layers.

For all types, ads and keywords the following metrics can be imported automatically:

Data coming from newsletter tools can be imported into Intelligence via campaign categories. This can be relevant for the evaluation of newsletter campaigns. 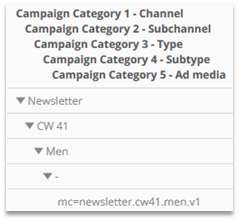 For example the following metrics can be imported automatically via datafeeds:

Enter the information you later want to see in the campaign tree. The tool generates a mediacode that you can use for a campaign.

Use this link to open the Campaign URL Builder 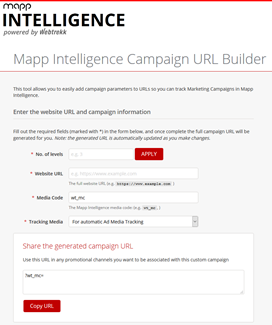 For every Ad media additional offsite metrics can be imported.

The following metrics are available by default:

These metrics are then available in the analyses.

Only advertising media, for which a campaign click has been measured, will be displayed.

Preliminary considerations: On which time basis is the imported data available?

The import is available through Excel, JSON, and datafeed.

Set the category type to "with Time relationship …"

Data can be added in the exported Excel table.

The following fields must be filled out for a correct assignment:

The imported data will be available after the next account update. The upload status can be viewed through Mapp Q3 > Configuration > Marketing Configuration > Show Current Imports.

Campaign views can be measured with Mapp Intelligence on the own website. Alternatively, the import is possible.

The tab "Campaign structure" shows all ads, that have been set up. Campaigns (or individual folders) can be edited or deactivated by clicking with the right mouse button.

All campaign calls until the reach of a website goal are saved in a Customer Journey.

Website goals can be set up and edited under Mapp Q3 > Configuration > Goal.

What should happen, if no campaign has been tracked prior to achieving a website goal?

For example, this is possible, when two orders are made within one visit.

If a website goal was already previously tracked, the same Customer Journey will be used for the following website goal.

No Customer Journey is written for the second order. Please contact our support if you require this setting.

Various logic rules exist for determining, which campaign(s) was responsible for achieving the website goal. In doing so either one or multiple campaigns can be assigned.

The duration of a campaign being recognized for the attribution can be defined campaign-specifically.

As for the attribution only campaigns are considered that have been clicked before a website goal has been attained, the order of 02-15 is never assigned to „Banner“.

Multiple assignments are possible for

Attribution is possible for one metric in each case.

The last five Ad media have a share on attaining of the website goal which is specified by percentual values.

If less than five Ad media are available, the data will be normalized.

4.2.2 Distribution across all Ad media

All Ad media have a share on attaining of the website goal which is specified by percentual values.

If less than 5 Ad media are available, the weightings will be distributed.

In addition to the position within the Customer Journey, the campaign type can also be used for analysis purposes with traffic source weightings.

The attribution, that is to be used as standard, is selected in the Marketing Configuration.

Only those models are supported, in which just one Ad media can "win".
Default: last Ad media wins, only external Ad media are taken into consideration.

Alternative attributions can be defined for each website goal (Mapp Q3 > Configuration > Goal).

Configure the attribution to carry out important calculation settings.

Which Ad media should be taken into consideration by the attribution?

With the definition shown above („Last Campaign“, „Consider only external Ad Media“) the website goal is assigned to the channel „Newsletter“ as this is the last clicked external ad media prior to the order.

The definition of whether an ad is internal or external is determined when configuring the Ad media.

Which data sources are taken into consideration?

If none of the following data sources is checked, by default only campaigns are considered for attribution, that are based on primary data sources (URL parameter, page action).

Example: Customer Journey with data sources and the configuration mentioned above

The attribution model „Last Campaign“ assigns the attribution to „Newsletter“ because SEO is not considered for attribution according to the configuration. In contrast, „Direct Campaign“ chooses the last ad media prior to the order.

Which metrics are calculated? (only for alternative attributions)

The following are available:

How should campaign views be attributed? (not for default attribution)

For non-default attributions, you can recognize the configuration of the attribution model in the name of the metric.

The syntax is: [name of the attributed metric] ([attribution type], [internal/exernal]), [website goal]